At the start of graduate school I got interested in topological mapping. I ended up implementing the work of Meng et al. on the TerraSentia robot . The topological map built from this work (right) is shown in contrast to the metric map built using RTAB-Map (left) of the lab I work in.

One can then use this topological map as well as a few trained models in order to navigate the robot to a goal image. This GIF is sped up by 2X.

One point of failure in the topological map creation was in the edges that span across the map.

This would mean that two parts of the graph that are actually far apart are represented as being close in the topological map, causing the robot to fail to navigate to the goal. Emmons et al. would coin this phenomenon as a wormhole. 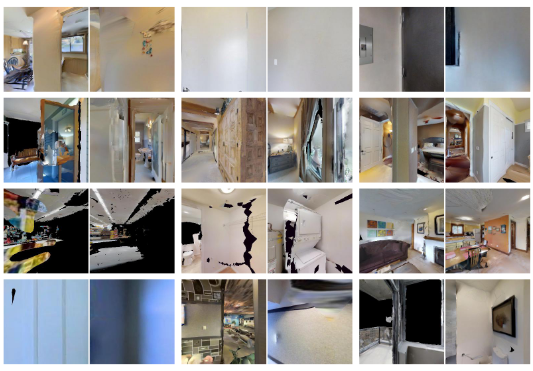 One way that I seeked to eliminate wormholes was to incorporate pose estimates from ORB-SLAM2.

Using Meng’s method, on average 7.29% of edges in the Gibson maps were wormholes. After incorporating pose I was able to reduce that to get an average of 0.19% of edges being wormholes. When using the respective maps on a down stream image-goal navigation task I found pruning the wormholes improved navigation success from 15.3% to 28.1%.